Other days, yeah. Mariah has been Big Bear and [[San Diego]] over the weekend, so I dusted off my Warlock on Arthas and decided to grind him to level 50 (from 42) so that he could both fill out his Demonolgy tree and get his Felguard. I just didn’t count on weekend warriors.

Immediately after starting a quest on Saturday morning I was obliged to defend myself from speciest Horde who were probably just a husband and wife team IRL trying to grab a few kills, but were ultimately traumatized after their meeting with me. So I moved location and had another team try and kill me. And another. But all this fighting honestly produced some awesome moments because how many level 46 Warlocks can say that they killed a level 58 Death Knight? A level 48 Rogue attacked me at the Steamwheedle Port in Tanaris and as I was finishing her off a Death Knight intervened and attacked me. I immediately spammed Fear, put a DoT on his pet to stop him from mounting and ran for Gadgetzan (the Highlander Boots from Arathi Basin and a Swiftness Potion were my two lifesavers). The Death Knight followed me on foot and was immediately killed by town guards. Easily my most fun kill of the weekend.

Weekend warriors turned what should have been a straight grind into a twelve hour passage through the valley of darkness. I dinged to level 50 at five o’clock in the morning in the backwoods of Felwood and getting an underpowered pet. I can understand the power of the Felguard at levels 70 and beyond, but at the moment you get the pet at level 50, it is severely underpowered. Playing through Demonology I am used to using my pets to control a situation. My Succubus can instantly stun a player for up to fifteen seconds and with the damage mitigation, mana and healing provided by talent tree my Voidwalker becomes the rock on which monsters break themselves. But the Felguard cannot do any of that. The Felguard’s melee damage at this level is middling, it cannot charge/stun players yet and it’s taunt is underpowered. Had I known all of this beforehand I might have stayed with the Affliction talent tree, but what’s done is done. 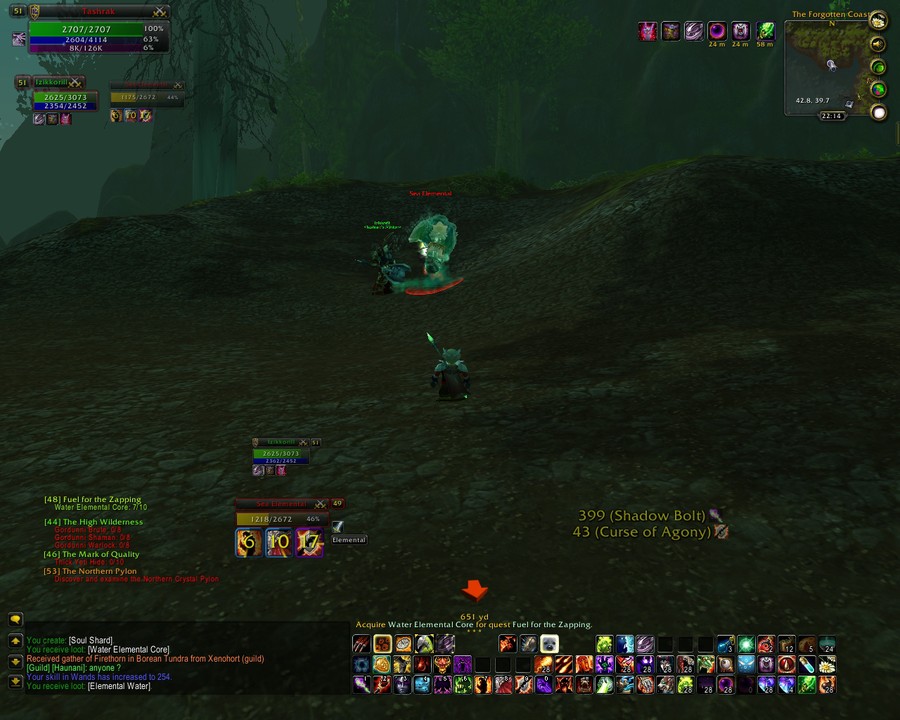 And maybe getting the Felguard was a premonition of Sunday? If I was the pigeon on Saturday, I was the statue on Sunday and died to every player who gave me so much as a casual glance. I was corpse-camped in Un’Goro and faced ride-by gankings in the Plaguelands. I lagged out so badly in Shattrath City that I ran diagnostics on my laptop and found that my hard disk might be on its last legs.