I seem to have picked up a very small following of Linux users, so I’m going to throw out a quick question: Why does Open Office handle rendering of the Microsoft DOC format so badly? Why does it stink so badly at what is such a touted core feature of the suite: Interoperability with Microsoft Office.

Before I am washed away in a sea of flames, let me qualify my question. I take issue with The Gimp because of its user interface. It is a terrible user interface. However I’ll acknowledge the breadth and depth of The Gimp’s features and the solid range of file formats that it is capable of reading from and saving to. My issue with Open Office quite the opposite: It’s user interface is blandly ordinary and perfectly usable, but every single document I subject to Open Office is turned into flaming ass.

I am not talking fancy, cutting-edge graphics. I am talking about rendering my resume. I want to edit my resume under Open Office and Linux with the security of the knowledge that when X HR worker opens up my resume in Microsoft Office, she won’t be looking at two or threes pages pages which look like I shit all over them.

Once you are given the order to put on the headphones, do not remove them under any circumstances. If you do, you may die a gruesome and horrible death. Thank you for your attention and have a nice day.
-Walter Bishop 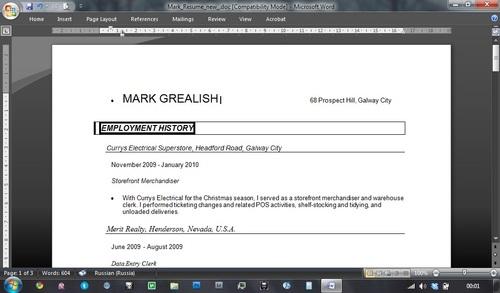 Grumble. In deference to Open Office Microsoft Office’s rendering isn’t that great either. If I can get away with it, I will begin forwarding my resume in PDF format. Okay so: Why is there such shoddy rendering in general with Open Office? I wouldn’t take such an issue with the fact save for my perception of this being a core feature of the suite.