I had planned all week to take a walk up to Tonabrocky today (Sunday), no matter the weather and so I woke bright and early for 9am to begin my preparations. I lay in bed for a few minutes, pondering the ungodly early hour on my fecking day off and after some deliberation I went back to sleep until 11am. I finally dragged my lazy ass out of bed at 11am and performed my daily ritual of checking my email, IMs, forums I read and my Auction House sales in World of Warcraft.

Ahh, the high-flying life of an urbane geek.

On the Asylum boards, I found a link to a thread on a martial arts forum that shows why Jersey should rightfully be despised for its fashion tastes by right-thinking people. So wrong, yet so funny. Read all of it. Be warned, its filled with rampant homophobia.

I spent a good half hour laughing my way through 8 pages before I finally made ready to go walking. Into my rucksack went a waterproof coat, gloves, a hat and two pairs of socks (you’ll understand it when it happens). Into my pants pockets went my iPod, my camera and my phone and then away I went!

First stop was the GBC for a full Irish breakfast. Delicious, always. After that I made for Thonabruckey by way of Westside and Rahoon. I went that way as I enjoy walking by St. Mary’s College and the roads beyond. The air of the area has always fascinated me, as its one of the older city suburbs. Its not so much that I would say run-down…I’d probably cut my own tongue out before I’d say that. Its more a dignified decay of the area. Whatever you wish to call it, I enjoy walking through the area. 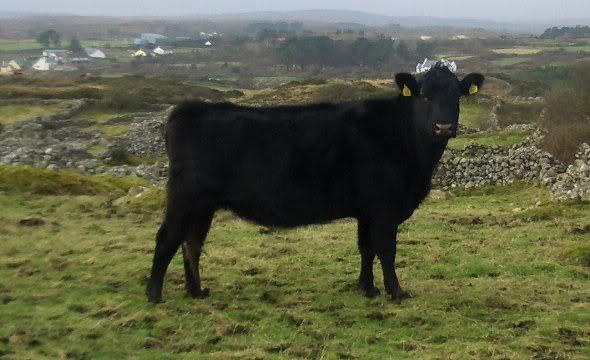 I stopped on the road to Thonabruckey, once I got out of the city, to talk to the one of the locals. His topic of choice was the quality of grass this season, so I soon made my excuses and went on my way. One thing that struck me while I was walking was just how rural Ireland is still. Certainly, the towns and cities are well-developed, but once you get outside them its still just fields, forests and farms as far as the eye can see. There I was, barely a fifteen minute walk from Westside and not the sound of a car was to be heard and all around me as far as I could see were fields, fields and more fields. Comparing this to the parts of England and the continent I’ve been to, where you have out of town residental, industrial and retail complexes pretty much everywhere, destroying the countryside. 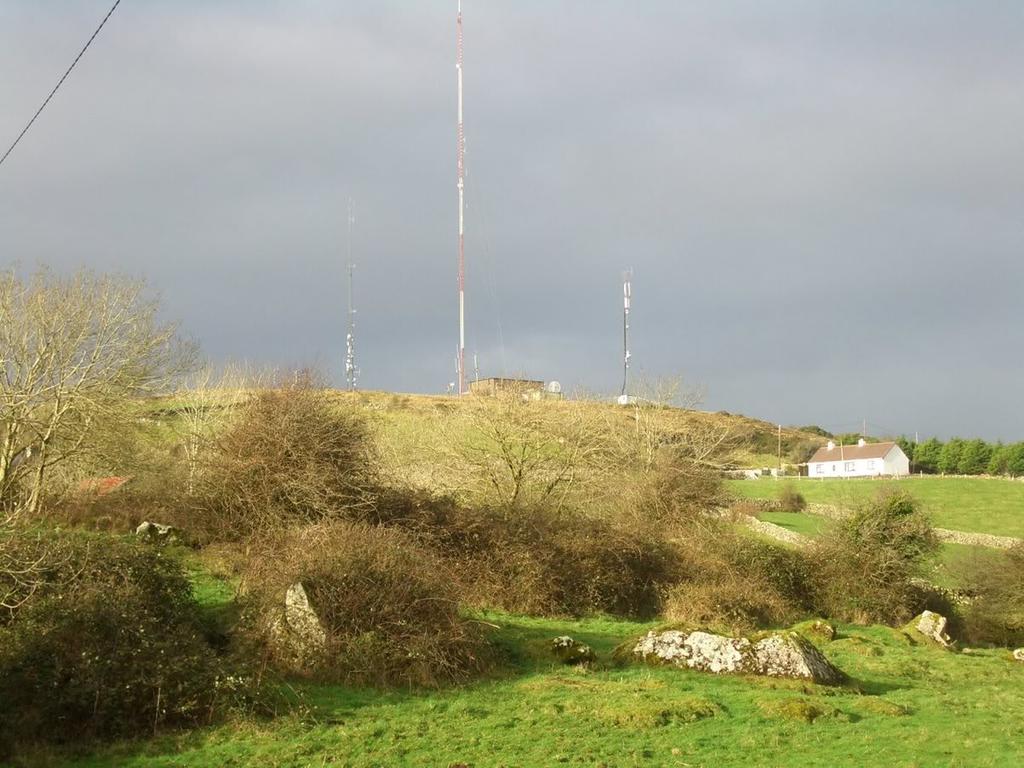 Finally I rounded a corner and caught sight of my destination: Thonabrucky. Its the highest point in and around the city and as you can see in the photo, that height is put to good use. The view from the hill is absolutely spectacular, which is why I wanted to go up there. Its been maybe three years since I’ve gone up that far, and then I didn’t have a camera. But I will come to the view. One thing that amused me was that no one can seem to agree on the spelling for the area. I found three road signs within feet of each other that had three different spellings of the name. Thonabruckey is an anglicised Irish name. When the British started colonising Ireland in the 16th century, they slightly changed the names of many areas. The pronunciation in Irish and English are mostly the same. For example, Mayo is Maigh Eo in Gaelic, which translates as “Plain of Yew Trees.” 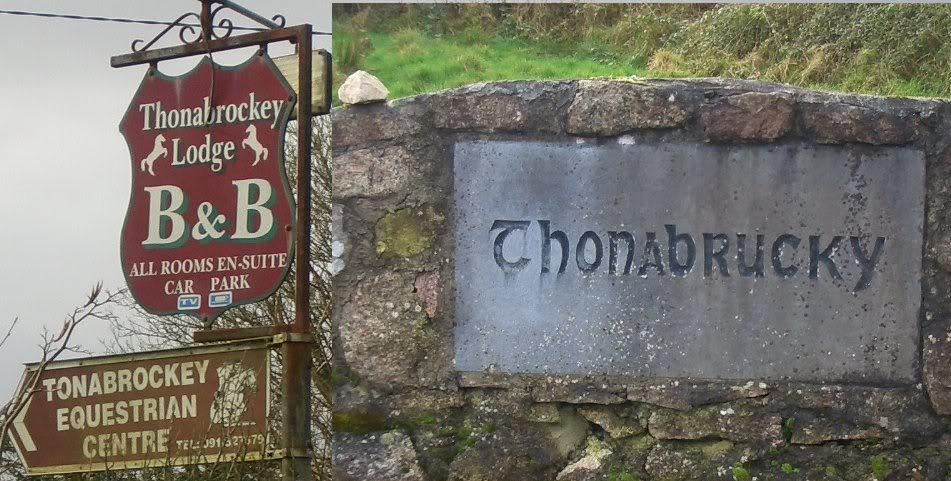 Thonabruckey – Thoin an Brocaigh – translates as “Badger’s Arse.” I kid you not. Really. I spent today exploring and photographing a badger’s arse. Huzzah.

There is a road on the near side of the hill to where I was coming from that leads around the back of it and to the peak, so I followed that, taking some photos as I went. 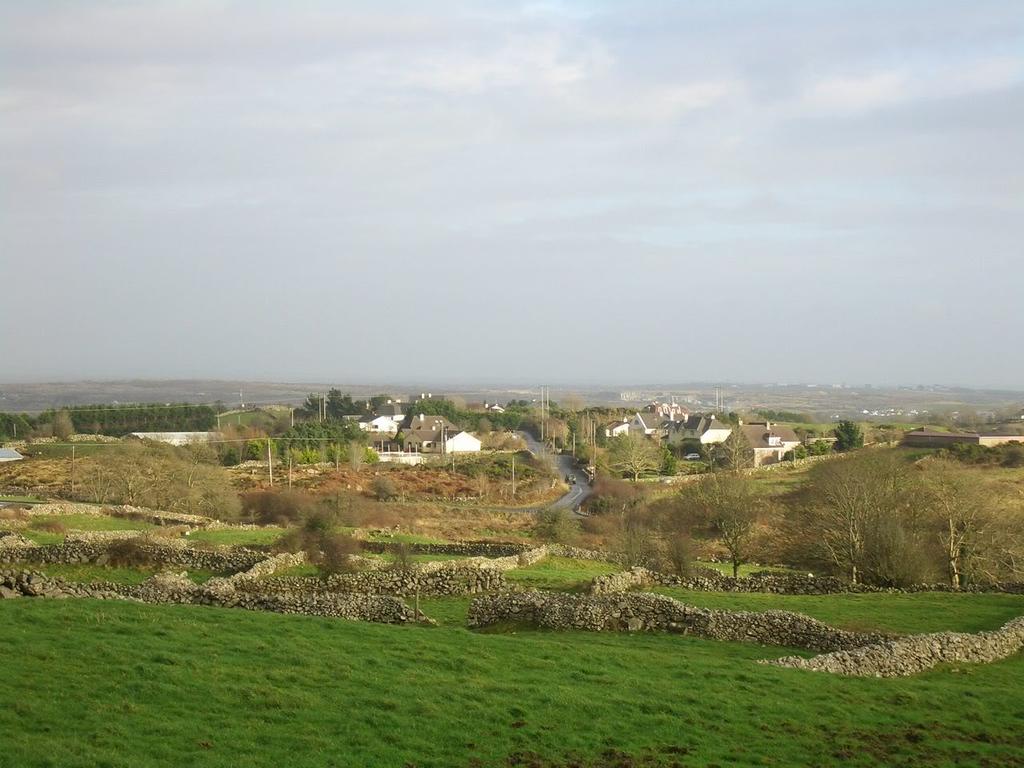 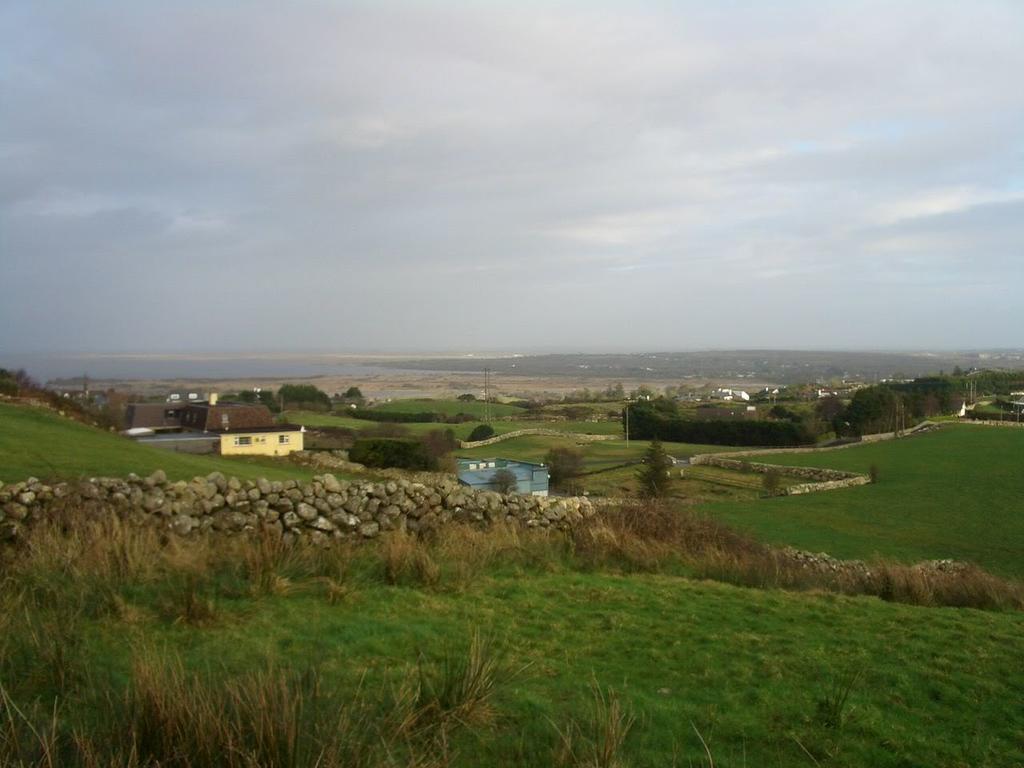 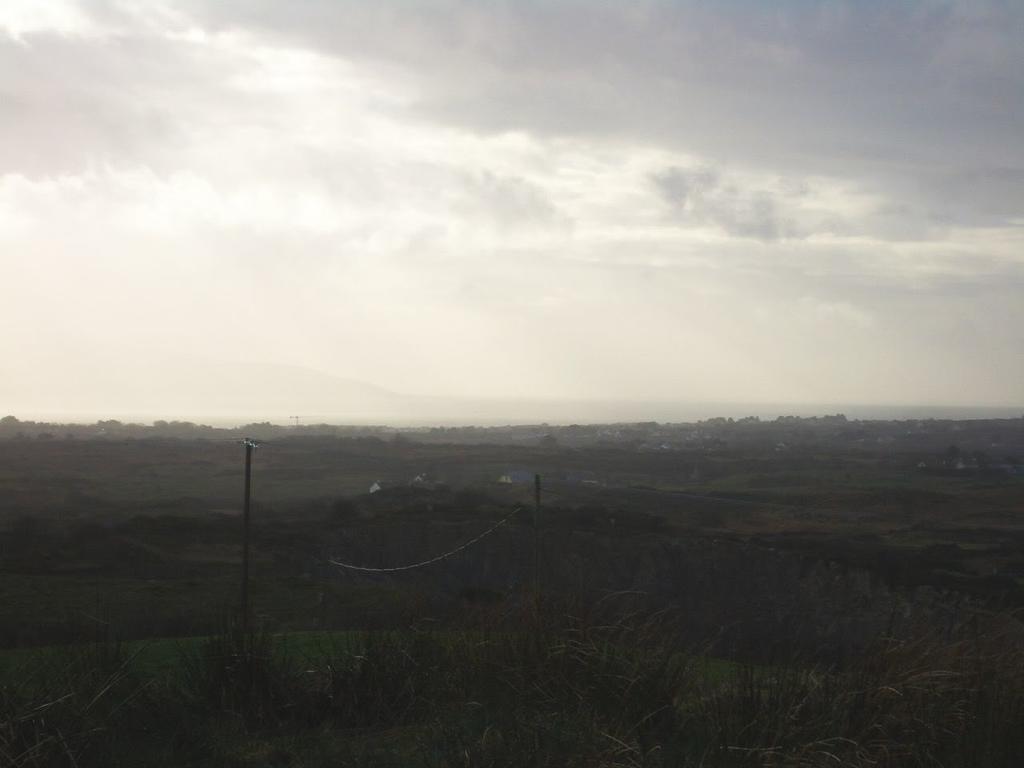 The view, as always, was utterly spectacular. There was a nasty glare over the bay, so I only one photo. You can see for yourself what the lighting was like. Galway was too far away and the day too dark and misty to take a decent picture. So that accounts for the South and West. But to the North and East? Wow. Lough Corrib and the hills marching away to Moycullen and beyond were utterly spectacular. I did my best to create a panoramic shot of the view. I make no apologies as to the quality of the photo. My camera wasn’t intended for this sort of landscape photography, I had no tripod and was standing on the side of the hill in the wind. So. The view here is from roughly North-West to South-East:

This has been the first panorama I created, using the open-source Hugin tool. There are binary downloads on the website for Windows, OS X and Linux, so why not grab it and try it? It doesn’t do the likes of matching alpha – you can see it for yourself in the photo – so pre and post-processing will have to be done by hand. I used the Gimp to clean up the panorama afterward. If you’re the lazy sort with money to burn, you might try Autostitch or one of the products it is part of. It runs quite well under Wine, so there’s no limit to using it under Linux as well.

I digress. In the middle of the photo, to the left and right of the pylon, is something that is worth mentioning: Those piles of stones in the fields behind are a Famine village. These were homes and villages abandoned during the Potato Famine of 1845-49 and its a very haunting moment when you walk around piles of stones in a field and realise its actually the ruins of a village. The entire area is dotted with the ruins of houses and villages which aren’t too hard to find if you know what signs to look for. People come in now and build their homes next to them probably without realising what they are. What happens once can happen again, which isn’t a very comforting thought. I have closer photos here and here. 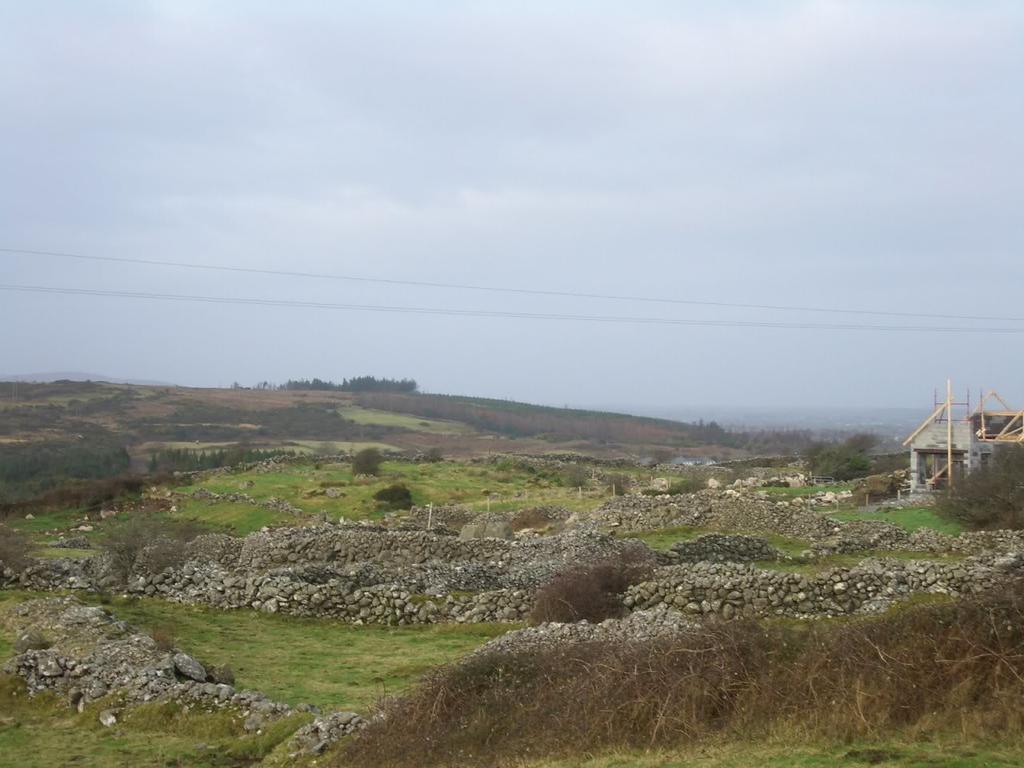 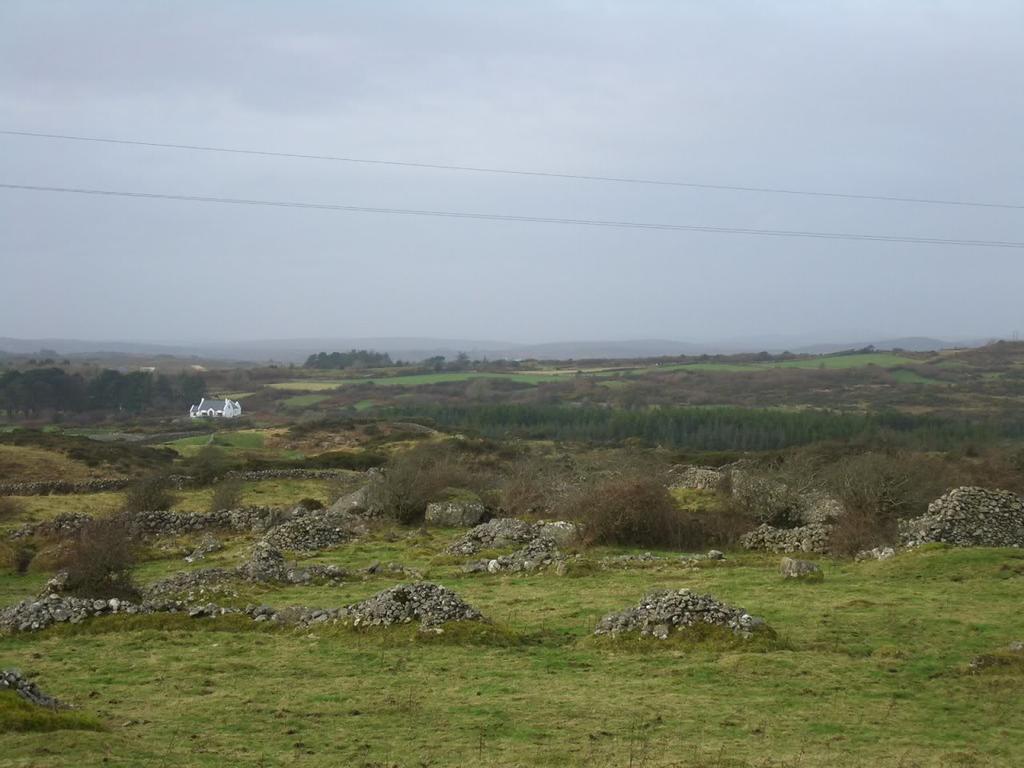 I headed down off the hill after that, nearly getting killed in the process after I judged a drop badly. My next stop was a disused quarry on the far side of the road. Half-Life 2, eat your heart out. If you’ve ever played the game, you’ll know that a lot of atmosphere in the game comes from its silences. You will be walking along the road and all that you can hear is the wind blowing, stirring up dust, making burnt-out buildings creak. All that you can see is decay, rusted machinery and ruined buildings. And if you didn’t play the game then I just told you, didn’t I? It was eerie to walk through. The atmosphere of the quarry was something to behold. Silence, except for the wind. Ruined sheds and rusted machinery all around me. I half-expected a Combine dropship to turn up at any moment to spew troopers at me. Only one photo from the quarry came out looking “okay”: Clicky.
I did have one moment of drama after that. I got so distracted listening to the George Winston album, December, that an American lady-friend sent me, I nearly went head-first into a bog hole. Curse you nameless lady-friend. 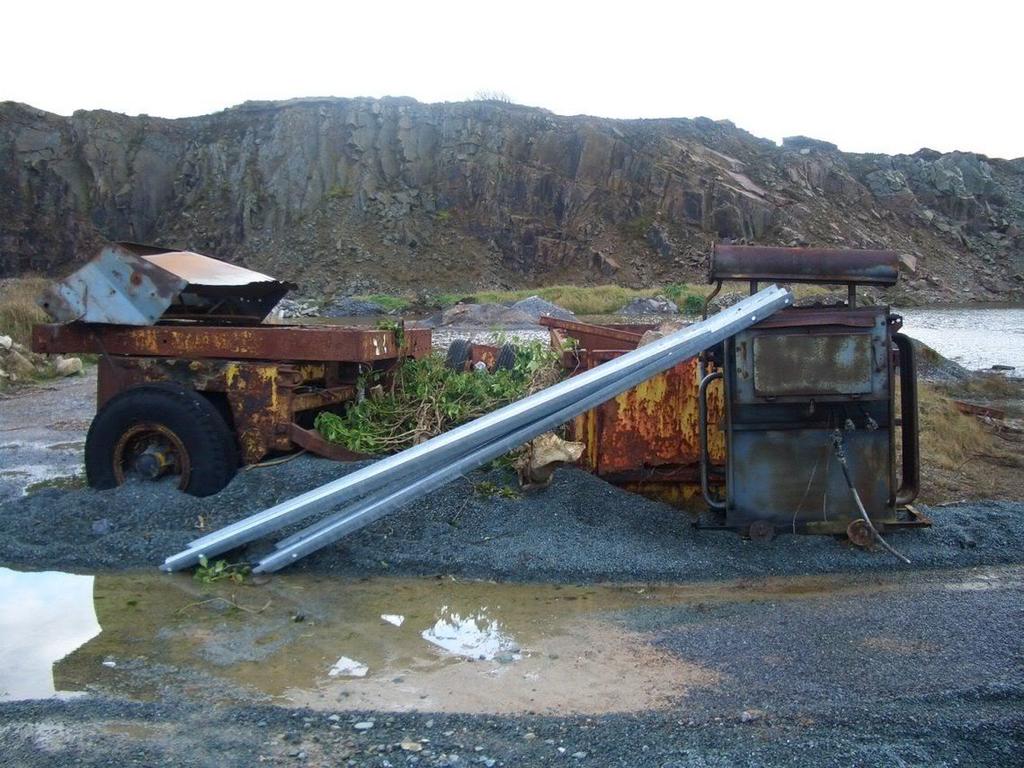 I had my camera filled after that, so I made to head home. I went by a different route, coming back into the city by Clybaun and Knocknacarra. I was going to walk the whole way home, but I got a message from a German friend that she wanted me to call her, so I caught the bus instead. Ahh, the joys of public transport. I called her and we talked and then I had a shower and food.

And that was my Fun and Exciting day.